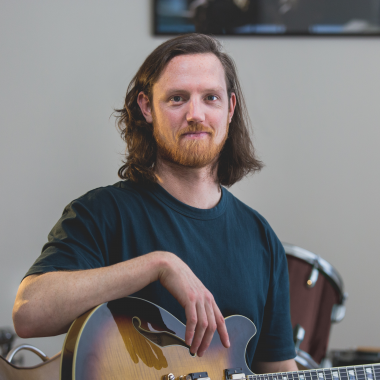 Sean has been performing and teaching professionally for over a decade. Since 2009 he has played a range of musical styles and venues in Canberra, Sydney and Melbourne. In 2013, he worked as co-producer, composer and musical director on the award winning documentary, Mining The Truth, which was voted Best Australian Film at the Environmental Film Festival Australia. This project fuelled Sean’s interest in composition and production, leading to his completion of a year long course in advanced sound recording at the Sydney Conservatorium of Music in 2016

To compliment this technical expertise, Sean moved to Melbourne the following year to further develop his skills as a performing artist. Through the Jazz and Improvisation program (Guitar) at the Victorian College of the Arts, he studied under veterans of the Australian jazz scene, such as Andrea Keller, Geoff Hughes, Peter Petrucci and James Sherlock. Sean has plays numerous gigs and popular venues across Melbourne, playing with some of our countries most talented musicians.

The breadth of Sean’s experience across the creative industries is invaluable in an era where up and coming musicians are, more than ever, playing the role of artist, producer, visual designer and publicist. Sean’s teaching is rooted in the philosophy that a student’s passion is the most powerful driver of instrumental and creative growth. By starting with their own connection to the musical world, he aims to catalyse student progress and build foundational skills that will support a positive and lifelong musical journey.